A member of PKF International. A global family of legally independent firms.

Russian Controlled Foreign Company (CFC) legislation can be defined as the measures adopted by Russian government to promote transparency and to combat tax avoidance by Russian taxpayers using foreign company structures. The Federal Law No 376-FZ dated 24 November 2014 “was entered into force on 1 January 2015 with the aim to tax participation interests by Russian tax residents in controlled foreign companies (CFCs) at the rate applicable in Russia currently 20 per cent for legal persons and 13 per cent for natural persons.

There are a number of exemptions from the taxation of Russian Controlled Foreign Company (CFC) new rules on:

–   Active foreign companies with at least 80% of active business income as mentioned in clause 4 of Article 309.1 of the Russian Tax Code  or,

–   Foreign companies controlled and managed by Russian residents which:

For Foreign companies controlled and managed by Russian residents with which Russia has signed a double tax treaty  emphasis will be given on:

(Different rules apply on the disposal of Russian property rich companies and on foreign companies managed and controlled from Russia.)

Income earned by foreign company which is derived from activities or investments in Russia will lose the benefit of reduced withholding tax provided for in the double tax treaties with Russia, if such foreign company is not the beneficial owner of such income. The beneficial owner should be person who has power over the usage and distribution of such income.

According to the Russian CFC legislation which foreign entities including Cyprus entities might not be considered controlled entities?

Foreign companies controlled and managed by Russian residents should meet any of the criteria of Control Foreign Company (CFC) rules exemptions i.e.

–        The above exemptions plus exemptions according to the Russian Tax Code. In brief non-commercial organizations, permanent establishments in Eurasian Economic Unions, banks or insurance organizations, issuers of circulated bonds where an agreement with Russia exists and not included on a “offshore list”, participates in mineral extraction projects with Russia, operators or direct shareholdings in a new offshore hydrocarbon deposits.

–        Foreign companies that can demonstrate that the company is an active foreign company as stated in clause 4 of Article 309.1 of the Russian Tax Code and demonstrate business substance in that foreign country by:

+ Own valuable intangibles i.e. intellectual property, performing the most important functions within the corporate structure and demonstrate economic business reason

–  Majority of board of Directors’ meetings are held in Russia.

– Management is effectively performed from Russia and mostly by Russian employees.

– Accounting and office administration is performed in Russia

– Important documentation is drafted and performed in Russia

– Russian ultimate beneficial owner involvement in management of the Company

International discretionary trust (Cyprus International trust) in which Settlor / beneficiary demonstrates that he does not influence profit distribution and has no rights to revoke assets after their transfer to the trust (except by inheritance etc). However Russian Settlor/founder must report participation in such structure irrespective of the residence status of the beneficiary; Other important considerations.

– a settlor and a beneficiary of a trust should not  be the same person,

– In the event of termination / liquidation of the trust, the settlor of the trust should not be entitled to the assets originally contributed to the trust,

– the settlor should not have the right to receive income from the trust, to give orders/instructions on income distribution or dispose of the trust income.

Investment funds (Cyprus Alternative Investment Funds (AIF)) having the form of a legal entity in the context of clause 2 of article 11 of the Russian Tax Code and If all persons – Russian tax residents  (in the case of physical persons – together with spouses and minor-age children) own participating interests (directly or indirectly) in the fund, amounting to less than 50%, but at the same time every investor (contributor) – Russian tax resident owns participating interest, amounted to less than 10% 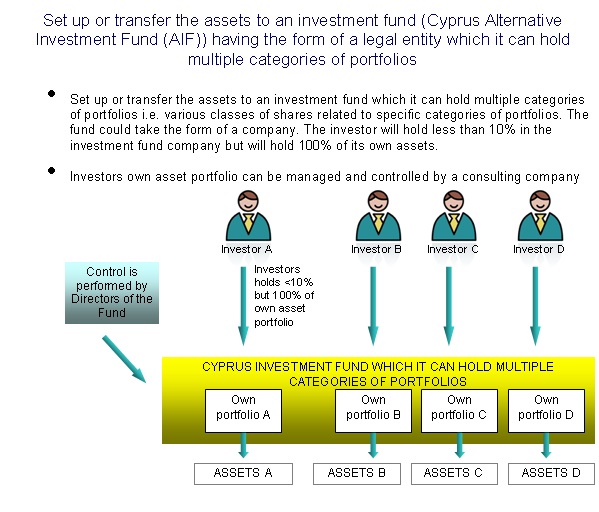 A Cyprus fund which is registered and governed by Cyprus Securities and Exchange Commission (CyCec) having LEI and ISIN number recognized worldwide as a traded security is considered a well regulated entity which is outside the control of any investor.  Cyprus Investment funds are fully managed and controlled by its directors and they need to abide by the Cyprus Securities and Exchange Commission Laws and Regulations. A Cyprus fund having its units – shares adequately dispersed to investors might not be considered a foreign controlled company (CFC) under Russian Law.

Issuance of registered private bond or issuance of bond listed in a recognized stock exchange by foreign entity (Cyprus Company) and purchased by an independent Russian company or an individual. Such an instrument in the hands of the Russian investors is considered an investment and not granting of a loan. Management and control of Cyprus Company rests with non Russian tax residents legal or physical persons holding the controlling shares of the Cyprus Company. Russian persons (legal or physical) will have the right to receive bond interest. A Russian person holder of a bond might not be considered a controlling person as defined by the Russian Law. Bond enlistment or issuance of a registered private bond shall be fully documented and demonstrated in all companies’ statute documents accordingly. Article 11 of Double Tax Treaty between Russia and Cyprus on bond interest must also be taken into consideration. 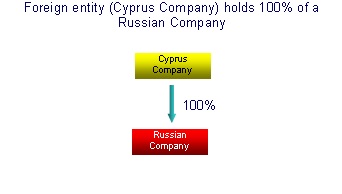 Foreign entity (Cyprus company) holds 100% of the Russian company, the structure is not reportable under Russian Law but it should be considered that the Russian taxation authorities according to most double tax treaties concluded by Russia (Cyprus has concluded a double tax treaty with Russia), and based on the exchange of information clause, have the right to request information provided such information is foreseeable relevant. That is to provide for exchange of information in tax matters to the widest possible extent but at the same time not at liberty to engage in ‘fishing expeditions’ or to request information that is unlikely to be relevant.

It appears that a large number of Russian interest foreign companies are not covered by the exemptions of the Russian Controlled Foreign Company (CFC) rules, though the status of such companies will need to be clarified based on the above criteria. However it is important to emphasize that the double tax treaties with which Russia has concluded with foreign countries including Cyprus cannot be overwritten. Double taxation agreements demonstrate taxing rights between two contracting states which cannot be superseded by any domestic law of any state. Russian legislation therefore has effect only to the extent that it is in line with Rus­sia’s double taxation agreements. It should also be emphasized that for those financial centers, with which Russia has concluded a double tax treaty (Cyprus has concluded a double tax treaty with Russia) can be an opportunity provided they are transparent and well regulated.

How we can help

–   We can help you to obtain visa or citizenship (passport) in another jurisdiction.

–   We can review your corporate structure (holding, financing and trading) and propose changes to your structure.

Please contact us for a free personal consultation. All information will be treated in the strictest confidence. We are happy to sign Non Disclosure Agreement (NDA) or any other legal safeguards.

The authors expressly disclaim all and any liability and responsibility to any person, entity or corporation who acts or fails to act as a consequence of any reliance upon the whole or any part of the contents of this publication.

Accordingly no person, entity or corporation should act or rely upon any matter or information as contained or implied within this publication without first obtaining advice from an appropriately qualified professional person or firm of advisors, and ensuring that such advice specifically relates to their particular circumstances.

PKF Cyprus firms are member firms of the PKF International Limited network of legally independent firms and do not accept any responsibility or liability for the actions or inactions on the part of any other individual member firm or firms.

For more information regarding our services and how we can help your or contact us for any enquiry, use below form.